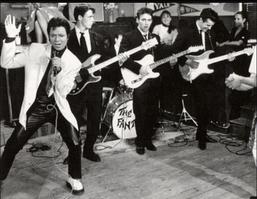 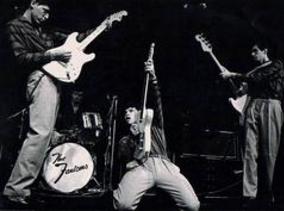 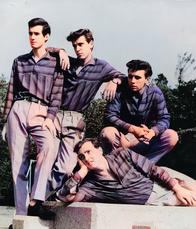 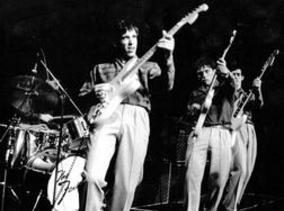 Over the next few years The Fantoms gigged extensively, performing at established music venues and clubs throughout the UK plus many lesser known venues, however the moto of the day , regardless where it was, if they pay , The Fantoms are happy to play. In addition to the many gigs in the UK , the band made several trips across the channel being based in Ghent Belgium and often drove through the rocky mountains to perform in Holland. Whilst in Belgium & Holland , the Fantoms performances ranged from the massive Ghent Festival which recorded an attendance of over 10,000 people , university bars , farmers conventions and a vast array of fun bars and clubs.

The Fantoms did become and still are, very attached to one particular bar called De Ploeg in Ghent. Frequented on many many occasions. The band took a memory lane trip back there in July 2017 when they travelled over to visit the modern day Ghent Festival and re-traced their tracks around their old stomping ground, which is another story in itself …..

It was at the Ghent Festival in the 1980’s where one of the bands most memorable and outstanding performances led to great difficulties in ending their set due to the massive crowd continually calling for more. Performing on the outside stage that was built up against the church building , the band ended up doing so many encores , the advertised top billed band that was due to follow The Fantoms never actually got to perform on stage at all and the local organisers ultimately ended up having to switch the street lights and power off to get the crowd to disperse. It was also quite surreal, when the following day whilst having time off the band decided to go to the cinema. Here and totally unexpected, they were presented with themselves being shown on the big screen in the cinema as part of an advertising trailer for the Ghent Festival .It was whilst on one of their trips to Belgium the band also got to record several songs performing on a private stage and had the sessions recorded on real cinematic film !! Copies of which have now been digitally copied. 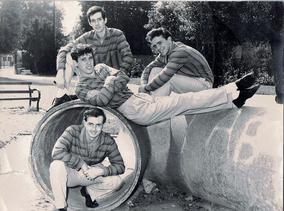 The Fantoms, among their usual routine of trekking up and down the country performing at the various working mens clubs , church halls and the various venues where the UK's Rock n Roll clubs held their events, the band also had the great opportunity to support one of the nicest ( and quietest performers off stage ), Mr. Alvin Stardust, at an event held at the Warwick University . It was here the band got to appreciate how hard students do actually work … at partying and drinking!! Another great memory event was when the band was the support act for one the country’s biggest and most popular bands in the UK, Showaddywaddy, at the Fulcrum in Slough. Great venue and a great bunch of guys.

Following the departure of bass player Malcolm from The Fantoms , it was by chance that Gary Daggers ( friend and bass player from the Rebound days ) happened to be back in the local area passing through and after a few discussions he soon decided to remain in the area & joined the band for the next phase of The Fantoms adventure.

It was also the start of The Fantoms ventures across the murky north sea , which in them days was by ferry , from Dover to Ostend , with the final destination, which ended up being the bands base camp for all future trips, the great city of Ghent in Belgium. It was through the hard work of their Belgium tour manager, Robert Van Yper, that The Fantoms picked up so many interesting gigs in both Belgium and Holland. The bands frequent trips to Belgium led them to developing great friendships with Robert & Jet , Freddie, Gigi and family who went out their way to keep the guys in the band entertained and well looked after and Hilda who unwittingly became ‘chaperone’ on a couple of occasions and had to put up with rather ‘boyish’ behaviour of The Fantoms on their nights off!

It was after one of the trips to Belgium that Malcolm decided it was time to leave the band and pursue other interests. Following in Malcolm's footsteps for a short period was bass player Paul Hudson who performed with the band on a temporary basis as the band was still being kept busy. 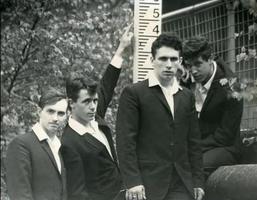 To be continued -- maybe 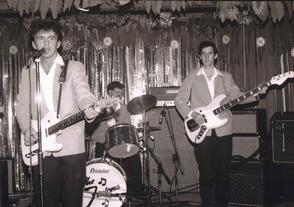 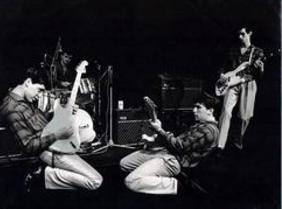 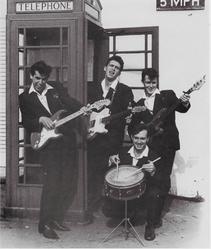 Actual images from the Ghent Festival

Other memorable occasions and events for the band during this period included collaborating with Tony Waddington , who is an accomplished singer songwriter and is credited for writing hit songs for The Rubetttes, Showaddywaddy, Petula Clark , Tom Jones among many others .

The band spent a week at Tony’s studio location where they recorded their 2nd single, Hearts of Stone (written by Tony) b-sided with Really Mystified. During this same session the band also recorded Silhouettes and Poor Little Lovesick Fool as potential releases however the recordings did not go as well as planned and as the saying goes ‘ they were destined for the cutting room floor ‘ ! However a new first for the band was the recording of another song written by Tony called Runaway From Your Love, which was an entry to The Eurovison Song Contest . As history will show, The Fantoms never got the call up to represent the UK and meet Terry Wogan.

Another ‘experience’ not to be forgotten by the band was the opportunity to perform at one of London's most prestige, exclusive and trendiest night clubs, La Valbonne. The highlight of the evening though was not the bands performance but the fact that Derek, Glenn & Neil's dad, had to bail the band out with their bar bill due to the ridiculous price of the beer!! This event was arranged for the band by Alvin Stardust's manager Roy, who was at the time considering to manage The Fantoms, and was looking at the possibilities of us performing around the holiday camp / cruise ship circuit. Alas, bluecoats and sailors the band never became! It was also Roy that funded the recording sessions and publication the bands 3rd single, Long Long Time b-sided with Too Many Times (both written by Glenn & Nick) for Lark records in Belgium.

Another important change to their trips to Europe was the requirement to include more British style beat music which included the earlier songs from great British bands such as The Beatles and The Hollies. It was for the band, a clear divide between the stage set lists for UK & for Europe. To even consider trying to perform tracks from either The Beatles or The Hollies in the UK, on the rock n roll scene, would have been met with great disapproval from the diehard rocknrollers !! Good job the internet & social media did not exist!!

It was during the bands trips to Belgium that discussions took place with regards to The Fantoms taking part in the live show ‘Grease’ for a local theatre company , but for reasons long forgotten , the opportunity never came to fruition.

​So the early excitement for The Fantoms was working with Cliff Richard and taking part in the BBC documentary about the great performer himself. This included recording D in Love with Cliff at the London Hard Rock Café plus recording a separate TV interview regarding their thoughts on the rock n roll scene. This all coincided with the release of the bands 1st single, 5ft2 Eyes of Blue, which was b-sided with the band’s own composition, Idle Star, and recorded for the Magnum Force record label. This opened up several performance avenues for the band including a performance on the highly popular TV show, Jangles. Another highlight was being asked to record a radio jingle for the immensely popular Radio 1 DJ of the time, Mike Read.

**Please note there is a prize for anyone that can supply the band with a copy of the radio jingle !!

The Fantoms , whilst under the management of Jeff Kilroy also performed at many of the famous venues such as The Rockgarden, Dingwalls, The Royalty, Caisters and also at the Marquee Club were they were backing one of the hottest new bands of the time, The Shaking Pyramids.​

The Early Years - Part One 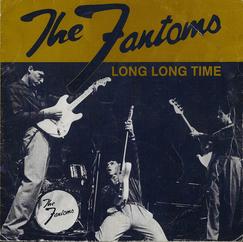 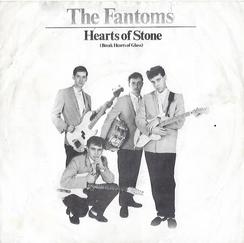 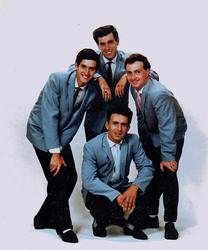